THE 75TH ANNIVERSARY OF THE MASS BREAKOUT BY PRISONERS-OF-WAR FROM CAMPO P.G. 49

From Friday 7th to Sunday 9th September 2018 a group of about 90 visitors visited Fontanellato, a town in the Emilia-Romagna area about 15 kms from Parma, in order to celebrate the events that occurred there at the time of the Italian Armistice on 9th September 1943, when Italy switched from the Axis to the Allied side and the 600 or so POWs held in Campo P.G. 49 in Fontanellato escaped en masse.

Some of the escapers made for Switzerland, while a number of them either took shelter with contadini (peasant) families or joined partisan groups.  Others headed south, having heard that the Allies were by now in southern Italy; for example, my own father, Toots Williams, and two DCLI brother officers, Captains Hugh Jobson and Ted Pryke, made a successful ‘home run’, taking only 35 days to cover 364 miles as the crow flies (but more like 600 miles given the mountainous terrain) south along the spine of the Apennines.

The 75th anniversary visit programme was organised by the Fontanellato town authorities, led by Mayor Francesco Trivelloni. On the British side, the preparations and execution of the programme were flawlessly managed by the committee of the Monte San Martino Trust (MSMT), led by its President, Sir Nicholas Young, whose father was a POW in Fontanellato. 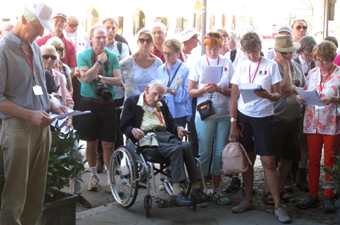 Most of the visitors to Fontanellato were the children, grandchildren and other relatives of the Allied POWs who had been held in the town from April 1943 onwards; one visitor represented the Escape Lines Memorial Society.  We were also accompanied by Frank Unwin, a 98-year old veteran of different POW camps in Italy and later in Germany.

MSMT was founded in 1989 by one of the escapers, Keith Killby, with the aim of ensuring that the bravery and generosity of the many Italians who had risked their lives to help these Allied servicemen, whether escapers or evaders, was not forgotten.  Annually MSMT issues bursaries to the grandchildren of those who helped the Allied personnel; the recipients visit England to study English.  In 2018 a total of 39 Italian students, aged 18-25, will have taken advantage of these bursaries; over the years some 1,000 have benefitted from these opportunities.

On the Saturday morning we walked for about 500 metres along a bund (raised bank) above a large irrigation ditch to the copse where the 600 POWs initially sought cover from view in a mass ‘lying up area’.  There a local expert on the Italian assistance to POWs called upon several members of our group to read short extracts from the diaries of escapers in which they described the confusion of these first moments of freedom

The Italian commandant of Campo P.G. 49, Colonel Vicedomini, had advised the Senior British Officer (SBO), Colonel Hugo De Burgh, to break out en masse and on the morning of 9th September they did just that, marching out through an exit cut in the perimeter fence and made their way to the ‘lying up area’ copse.  German troops reached the now empty camp several hours later.  On discovering that the POWs had disappeared, they beat up and arrested the commandant and proceeded to trash the camp before driving off.  It appeared that there were more important tasks to deal with rather than to start trying to round up escaped POWs.

During the next few days Italian children brought Red Cross parcel items of food that they had salvaged from the camp to the copse and gave them to the escapers, even though the children and their families were very poor. Adult peasant farmers (contadini) also appeared from the surrounding area and gave items of civilian clothing to the escapers in order to help them blend better into the surrounding countryside.

These were the first of countless acts of compassion and generosity that the escapers were to experience, all of which placed their donors at grave risk.  The Germans and their local fascist allies offered large rewards (1,800 Lira) for escapers and for those who dared to help them.  Those Italian helpers who were arrested routinely faced torture and execution or deportation to concentration camps in Germany, where large numbers of them perished.

Retracing the steps of many of the escapers, our group walked for about 4 kms and ended up in the town of Soragno, where we were welcomed by the owner of the town’s fortress palace, and we were then given a guided tour around the splendid Rocca Meli Lupi. 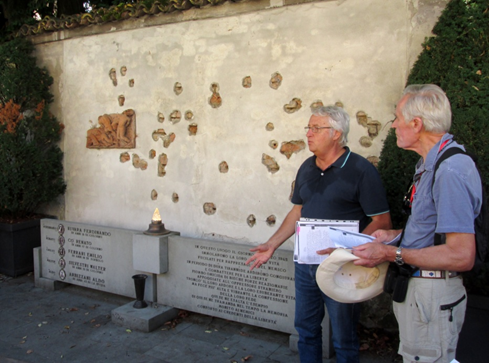 Before leaving Soragno we were taken to the memorial to four partisans who were executed in the heart of the town along the rear wall of the Rocca; the bullet holes have been preserved in order to emphasise the brutal circumstances of their deaths. We received a grim briefing on the risks taken by those who opposed the fascist regime which often retaliated by taking and killing blameless hostages in response to partisan operations.

The final day of the 75th Anniversary weekend saw everyone gather in front of the town’s fortress, the Rocca Sanvitale, which was to be the start point for our procession through the town of Fontanellato.  The Mayor, the Red Cross representative, the MSMT President, the town’s banner and the local brass band formed up in the sunshine and prepared to lead us all through the town, via the war memorial, to the main church, the Santuario Basilica della Beata Vergine del Santo Rosario. 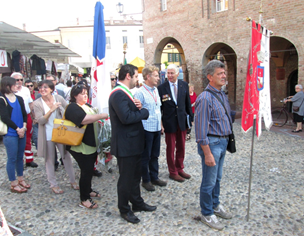 The Mayor, Hugo De Burgh (son of the SBO) and Nick Young

Pretty much exactly as per the programme the band played a medley of appropriate marching tunes in order to get us all into the mood and then it led us off into the town. 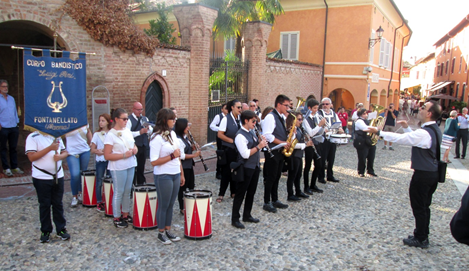 What perhaps no one had anticipated was that Sunday was market day and so the whole procession – band, VIPs and over a hundred other participants – had to wend its way through the market stalls, strolling shoppers, pavement coffee drinkers and the rest en route to the town’s war memorial. 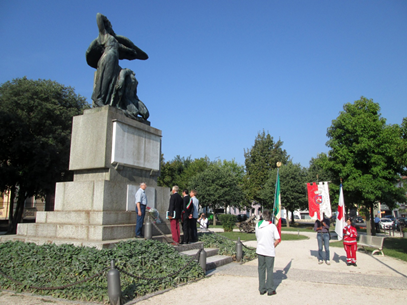 From the war memorial the band led us to the church which was already very full and we waited outside while seats were found for the MSMT visitors in the side chapels near the altar.  We then enjoyed the majesty of the Mass, during which the lessons were read in English by members of our group and were then repeated in Italian by local readers.  It was a moving experience in glorious surroundings.

After the church service it was time to move on to the final phase of the commemorative programme: the ceremony at the former Campo P.G. 49 building, which is now the Cardinal Ferrari Centre for people with mental impairments. 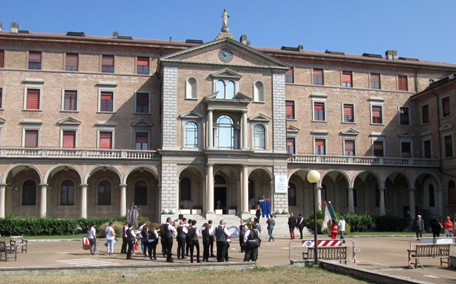 The procession arriving at the front of the former Campo P.G. 49

Once the Mayor and the MSMT President had reached the main steps of the magnificent former orphanage (only completed in 1939), the band played both the British and the Italian national anthems, a wreath was laid at the feet of Cardinal Ferrari’s statue and the final formal speeches were made by both parties. 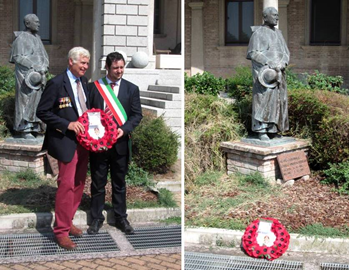 The wreath laid in the former Campo P.G. 49

Although there are numerous exhibits that show how it was designed and equipped to work as an orphanage, unfortunately the only evidence inside the Cardinal Ferrari Centre that attests to its role as a POW camp is a marble plaque in Italian on the wall of a ground floor corridor. 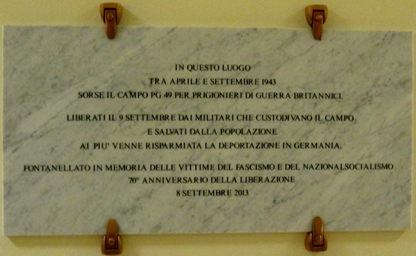 The memorial plaque to Campo P.G. 49 inside the Cardinal Ferrari Centre

The final event of the programme was an informal light lunch held in the shade behind the Cardinal Ferrari Centre and so pretty much in the area used by the POWs for sports.  As we bade fond farewells to our Italian hosts we reflected on how the extraordinary compassion and courage demonstrated by ordinary local men and women 75 years earlier had left such an enduring and entirely positive impression on those whom they had helped.  We all left with our faith in human nature restored and our support for the MSMT stronger than ever.