The Company have had a busy but successful year and are going from strength to strength.

In the summer four cadets enjoyed a trip of a lifetime experiencing an adventure training expedition in Bavaria organised by the Cadet Centre for Adventurous Training.  In November all detachments supported the Royal British Legion’s Poppy Appeal and Remembrance Sunday Parades. December was a particularly busy time with not only a weekend camp at Strensall but throughout the month many cadets were involved in filling shoeboxes for the ‘Treats for Troops at Christmas’ charity appeal. In January, the Company held a very enjoyable Mess Dinner with guest of honour Commandant of Yorkshire North & West Army Cadet Force Colonel Jim Greenlee. In February senior cadets attended an army insight weekend at Catterick with 8 Rifles which was a great success.

The Army Cadet Force suspended its face to face activities in March due to COVID-19 and since then adult volunteers have been providing virtual Army Proficiency Certificate training. This is working very effectively not only in continuing training but also keeping the cadets engaged and interested in army cadet activities.

In May the Company raised £1000 for the charity Yorkshire Cadet Trust by cadets and adult volunteers undertaking varying challenges around the home and local area. Challenges ranged from cycling to a sponsored silence and were all carried out within the Government’s staying safe guidelines.

Here are some the Company’s highlights in more detail:

In March Cadet CSjt Jamie Lofthouse (17) of Wakefield Detachment was promoted to the rank of Cadet Company Serjeant Major in E(THE RIFLES) Company.

CSM Lofthouse joined the Army Cadet Force in 2015 and has grasped many of the opportunities the organisation has offered him including representing his Company in the National Rifles Cadet Cup Competition and taking part in the Cadet Armistice 100 Exercise to the Somme Battlefields in 2018.

CSM Lofthouse has been a member of Minden Band & Bugles playing the flute and through this he has achieved 2 STAR Music Corps of Drums and Military Bands Music Foundation. He worked hard towards the vocational qualification of CVQO BTEC Level 2 in Teamwork and Personal Development in the Community and was awarded his Diploma in 2019. He is currently completing virtually the CVQO BTEC Level 2 Diploma in Music for Practical Performance.

As CSM Lofthouse is turning 18 in July he is applying to the Army Cadet Force Staff Cadet scheme to enable him to further his training and development for another year. He is planning to join the Royal Signals in 2021 specialising in electronic warfare and signal intelligence. 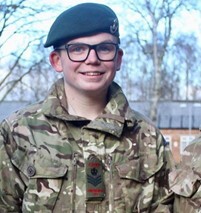 The current situation has brought both challenges and opportunities for music as Minden Band & Bugles have had to adapt to a completely alien way of training and are learning rapidly on the job. Every Wednesday the cadets and adults meet over zoom then break off into separate Google classrooms: flutes, drums and bugles. The adult volunteers are delivering a combination of live feed training mixed with quizzes and games that go hand in hand in confirming learning from lessons. There are plans afoot for exciting musical projects and competitions as well as discussions of a potential collaboration at Brigade Level.

Minden Band & Bugles member Cadet Karla Fell who plays the flute said: “The adults are working very hard to provide training resources. Cadets are still set work to complete weekly and are expected to record performances and upload the results. It is a different way of learning, but we are still having the same fun and laughter. On behalf of all the cadets I would like to say we are very grateful for all the hard work the adults are putting in and we appreciate it very much.”

Bugle Major CSjt Craig Rosser said. “There has never been a better time to learn new skills, and along with the cadets, our adults are most definitely honing their IT skills to levels that they would not usually have the time to do.  So, from here we continue in the true spirt of The Rifles ‘Swift & Bold’.” 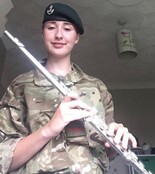 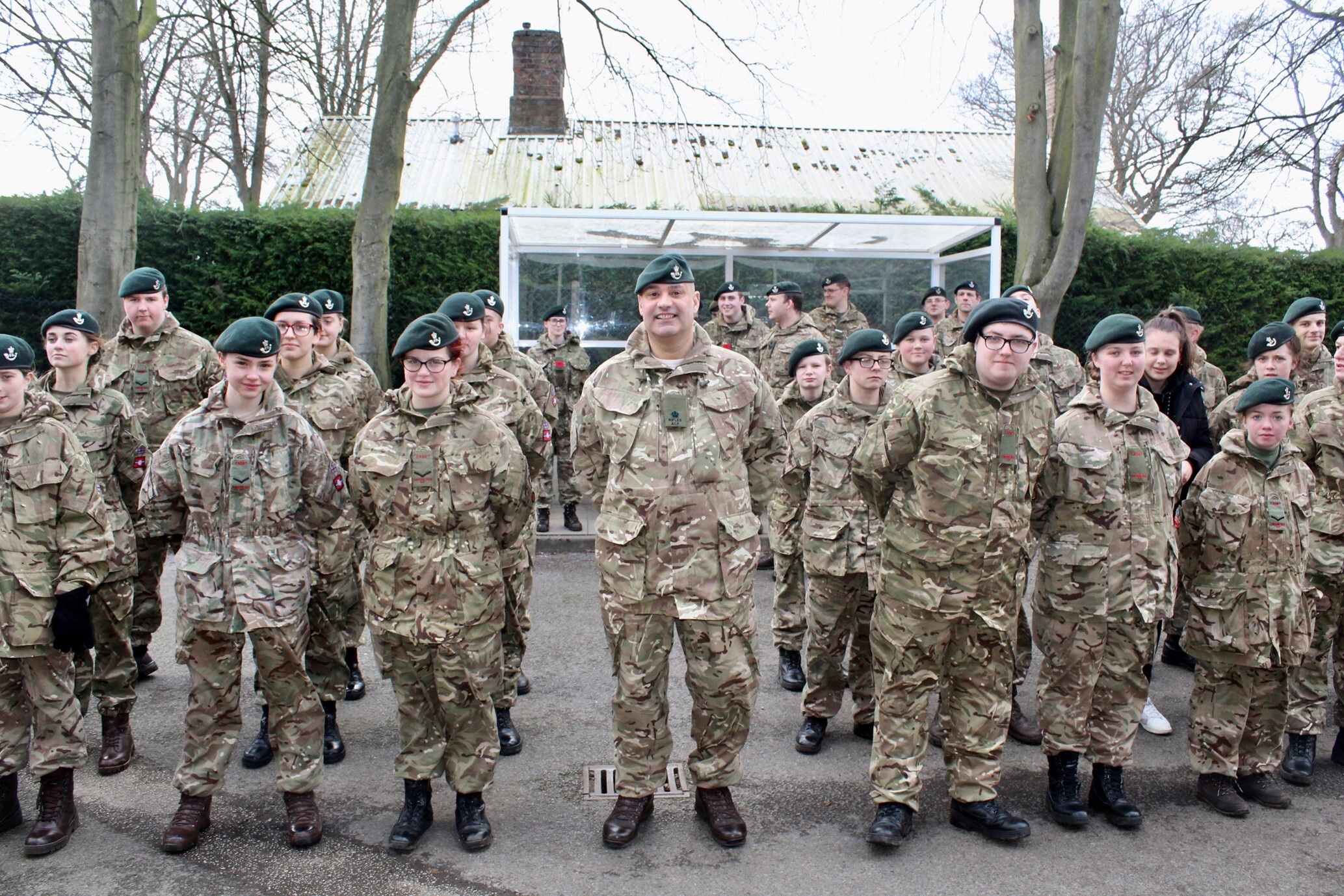 Cadet Lance Corporal Benjamin Wheeler and Cadet Josh Atkinson both scooped prizes in an Armed Forces Day 2020 competition launched by Yorkshire North & West Army Cadet Force in June. Both cadets created eye-catching posters celebrating our armed forces. They each won signed copies of books written by Jordan Wylie, one of the National Army Cadet Force Ambassadors. Jordan is a former soldier, extreme adventurer and one of the stars of Channel 4’s BAFTA nominated shows ‘Hunted’ and ‘Celebrity Hunted’ and had kindly donated prizes to the competition after taking part in a Question & Answer session with Yorkshire North & West ACF cadets in May. 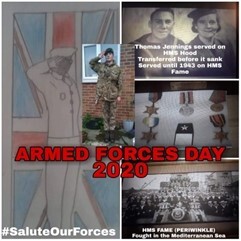 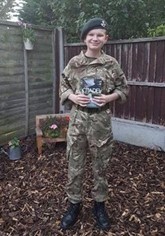 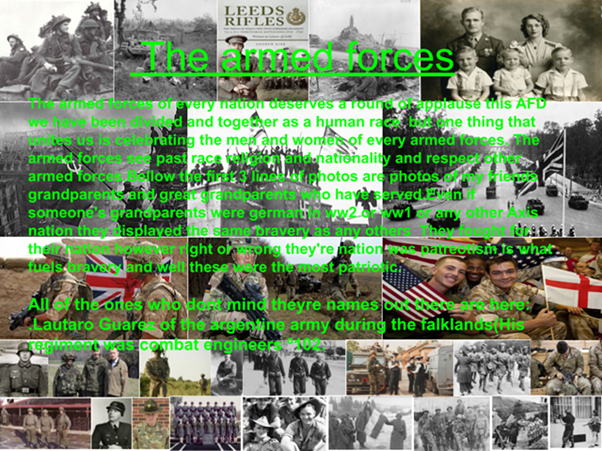 Senior cadets in the Company joined forces with others from across the County in the ‘Merlin’ cadre. Over the two weeks this experienced group of cadets developed their self-reliance, leadership, and team building skills through taking part in fieldcraft exercises, adventure training, command tasks and social activities.

Junior cadets experienced wide ranging activities including fieldcraft, shooting, training in built up areas, signals and adventure training in the sea and surrounding countryside. It was an enjoyable and successful camp for all the Company with several cadets scooping end of camp awards including Cadet Rebecca Jones (Pontefract Detachment) who was awarded the Commandant’s Medal for outstanding performance! 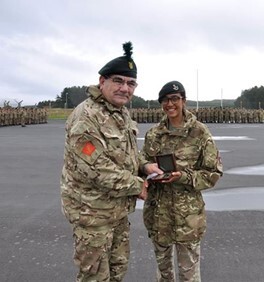 HRH The Duchess of Cornwall with The Colonel-in-Chief's Brooch